Christianity and the Nazis 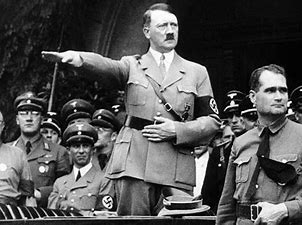 Adolf Hitler was hostile towards Christianity.  He openly renounced the Catholicism of his upbringing and came to view Christianity as ‘a fairy story invented by the Jews.’  Yet he also dismissed atheism.

‘The Jews and their Lies’

Tragically antisemitism in the Christian church stretches all the way back to the Church Fathers.  For example, Tertullian had a particular dislike of Jews and even Augustine felt that Jews should be reminded of their participation in the death of Jesus.

The reformer Luther unfortunately is guilty of anti-Semitism.  In 1523 Luther wrote a pamphlet entitled, ‘That Jesus was born a Jew’, which aimed at winning Jewish converts.  But by 1543 his attitude towards Jews had hardened.  He wrote the pamphlet, ‘On the Jews and their Lies’.  He did not call for genocide, but he did demand that synagogues be destroyed and Jewish property be confiscated.  The Nazis widely published this work.

The following is a quote from ‘The Jews and their Lies’:

First, that their synagogues be burned down, and that all who are able toss in sulphur and pitch; it would be good if someone could also throw in some hellfire. That would demonstrate to God our serious resolve and be evidence to all the world that it was in ignorance that we tolerated such houses, in which the Jews have reviled God, our dear Creator and Father, and his Son most shamefully up till now but that we have now given them their due reward.”

Luther’s words have terrible resonance in the awful events of Kristallnacht.  This was a pogrom carried out against the Jews by SA paramilitary forces and civilians on 9th and 10th November 1938.  The German authorities looked on without intervening.  The name ‘Crystal Night’ comes from the shards of broken glass that littered the streets from the broken windows of Jewish owned stores, buildings and synagogues. 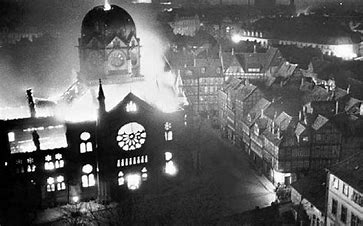 The liberal theology of the early twentieth-century also resonated to anti-Semite thinking.  Miracles like the virgin birth were discounted.  Some suggested that Mary was actually impregnated by a Roman soldier and the ‘myth’ of the virgin birth was an attempt to cover this up.  The respected liberal theologian Adolf von Harnack thought that Christianity went so far beyond Judaism that the Old Testament might not belong in the Christian Bible at all.  Few Christians in the 1920s would have gone this far, but many were downplaying the Jewish origins of their Christian faith.

In 1933 the ruling Nazi Brownshirts unleashed a wave of anti-Semitic violence.  Hundreds of Jews were murdered.  There was a boycott against Jewish businesses.  The ‘Aryan Paragraph’ was a law that excluded Jews from public office.

When the Nazis took power, the German Protestant church consisted of a federation of independent churches which included Lutheran, Reformed and United traditions.  In 1933 the leadership of the Protestant federation agreed to write a new constitution for a new ‘national’ church.  This would be called The German Evangelical Church.

The church adopted the Aryan Paragraph that effectively defrocked clergy of a Jewish descent and even clergy married to non-Aryans.

The ‘German Christians’ were a group of pro-Nazis in the Protestant Church.  They were sympathetic to the Nazi’s goal of ‘co-ordinating’ the individual Protestant churches into a uniform Reich church.

On 13th November 1933 a rally of ‘German Christians’ was held in Berlin.  Before a packed hall banners proclaimed the unity of National Socialism and Christianity.  Swastikas were also on display.  A series of speakers called for the removal of pastors who were unsympathetic to National Socialism, the removal of the Old Testament from the Bible and the addition of a more ‘heroic’ interpretation of Jesus who should be portrayed as battling corrupt Jewish influences.

This movement was primarily religious rather than political.  They were opposed to government-sponsored efforts to unify all Protestant churches into a single pro-Nazi German Evangelical Church.

The Barman Declaration of Faith

May 1934.  This was primarily authored by the notable Swiss Theologian Karl Barth with the help of other protesting pastors.  It reaffirmed the belief that the German church was not an ‘organ of the state’ and that state control over the church was doctrinally false.  This declaration became the foundation of the Confessing Church.

In May 1936 the confessing Church addressed a polite, but firm, memorandum to Hitler.   This memorandum protested against the Nazi regime’s anti-Christian tendencies, its antisemitism and demanded that they stop interfering in the internal affairs of the Protestant church.

The Nazis attitude towards the church

When the war came in 1939 the German Christians longed to provide military chaplains.  They hailed the war as a great sacrament of blood.  But the Nazi’s were unimpressed.  They limited the number of chaplains and there was even a so-called Uriah Law—where chaplains were sent to the front of combat.  Hitler’s view was that ‘the best thing is to let Christianity die a natural death.’ Dietrich Bonhoeffer was a young Confessing Church pastor who saw Nazism for what it was.  He saw the Nazi regime as no longer being a state but as a criminal conspiracy.  He became active in a failed plot to kill Hitler.  In 1945 he was hanged.    He lamented that even the Confessing Church had not adequately stood up to Hitler.  Remember that the Confessing Church primarily had theological rather than political objections to the Nazis.  He explained that when it came to evils done by the state the average Christian scarcely consulted their conscience.  However, when it came to resisting the Nazis their conscience was full of scruples.  While many Christians would not agree with taking part in an assignation plot surely there is a call to stand up to state evil.

Am I my brother’s keeper?

The majority of Protestants sided neither with the German Christians or the Confessing Church.  Many within the Confessing Church did not speak out against the persecutions of the Jews and others.  Smaller churches like the Methodists, New Apostolic Church and sects like the Christian Science seemed concerned primarily with protecting themselves.  The Nazi’s generally left these smaller groups alone.  However, the Jehovah Witnesses did suffer under the Nazi’s.  While their Watchtower magazine explained that they hated the Jews as much as any other religion, they were disliked for being pacifists and they refused to use the ‘Heil Hitler’ salute.

But why were so many Christians apathetic towards or even supportive of the Nazis?  Maybe like Cain they felt that they were not their bother’s keeper!  I suggest a few reasons leads Christians then and know to keep their mouths shut in the face of political evil:

1.   Fear:  This has to be the biggest reason for political inaction now as then.  Who wants to put their head up when that will bring them into the firing line?

2.    Pragmatism:  We face a danger of being too political as well as not being political enough.  It is sad to see churches split over legitimate political disagreement.  It is sad to see people put their politics ahead of their love for fellow believers.  But this desire not to rock the boat can be dangerous when the time comes to speak instead of stay silent.  We have to ask ourselves ‘am I prone to being too politically divisive or too unwilling to challenge the status quo?

3.   Ignorance:  Some Christians welcomed the rise of the Nazis because it countered some of the rising secularism at the time.  Some thought that National Socialism would be a stepping stone to national revival, and that when the national revival happened the uglier face of Nazism would disappear.  They were willing to overlook Hitler’s many faults because they thought there were aspects in which he might help their agenda.  Remember that John the Baptist did not think King Herod’s personal life was off limits!

4.   Naivety:  Some believers told themselves stories of how Hitler carried a well-thumbed New Testament in his pocket.  Even in 1941 a rumour spread that Hitler had experienced a Christian conversion and now confessed Christian faith.

5.    Spite:  The sad truth is that many people approved of Hitler’s anti-Semitism.  It reflected their own tribal hatreds.  A narrow sense of patriotic nationalism is not hard to stoke up in our proud and arrogant hearts.  People like to be told that they belong to a special and superior people.