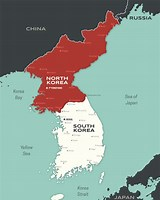 The numbers of evangelicals in Asia has been small and mission work has been slow.  But there are two exceptions: Korea and China.  I am going to look at Korea now.

The first recorded evangelical convert to be baptised in Korea was in 1879.  One hundred years later the evangelicals numbered 10 million in South Korea, about 20% of the population.  South Korea has become one of the great sending countries for missions, with South Korean missionaries working in over 170 countries in the world (they are second only to the United States of America in terms of numbers being sent).  Seoul is home to the largest church in the world, a church with a congregation of around 600,000 (who meet in seven consecutive services in a 31,000-seater auditorium).

Until 1905 Korea was frequently described as a hermit kingdom for the fact that it was so closed to outsiders.  This inhibited missionary attempts to reach the country.

In 1884, when missionaries were still banned from Korea, Horace Allen arrived in the country as an American diplomat.  Allan was a medical doctor.  He hoped to begin missionary work under cover.  His success in treating a court official opened up attitudes.  Missionaries were permitted to establish hospitals in Seoul (1 Presbyterian and 3 Methodist) and schools (2 Presbyterian and 2 Methodist).  They charged little or nothing for these services and began to establish a good reputation for Christianity.

By 1890 the Presbyterians claimed 100 converts and the Methodists only 9.  Not only were the numbers small but the missionaries feared that some of these were ‘Rice Christians’ attracted by the hope of receiving charity and money.  One missionary, John Nevius, came up with a strategy to test the sincerity of the converts—in order to become a member of the church you had to bring a new convert with you.  This caused Koreans to reach out to their fellow Koreans.

The missionaries had a particular interest in the rights of Korean women.  Half the mission schools opened before 1910 were girls’ schools.  They objected to the caste system and opposed Confucianism.

In 1905 Japan secured control over Korea, and they established direct rule in 1910.  The Japanese closed newspapers and banned public associations.  Tens of thousands were detained without trial, and many of these were tortured.

In 1903 R. A. Hardie, a Canadian Methodist who had been wrestling with discouragement had a special experience of God’s grace.  This spread to his congregation and people started coming to pray and study the Bible.  After 1905 the evangelical church began to see significant growth.  In 1907 a ten-day-conference was planned for Korea’s second city, Pyongyang.  Five hundred men attended on 6th January (and women had separate meetings).  ‘Man after man would rise, confess his sin, break down and weep, and then throw himself on the floor and beat the floor with his fists in agony of conviction …  They would break out into uncontrollable weeping and we would all weep together.  We couldn’t help it.’  This revival began to spread across the country.  Thirty thousand Koreans applied for baptism that year.  These revivals accelerated the transfer of control for missionaries to Korean leadership.  One practice that remains to this date that began in 1907 is that of ‘Union Prayer’, where everyone present in the meeting prays aloud at the same time.

Evangelicals assured the Japanese authorities that they were not political.  This meant that they were exempted from a 1907 ban of all Korean associations or organisations.  However, preachers started teaching that Japan was the Anti-Christ and the story of David and Goliath was used so often in Korean sermons to illustrate Korea and Japanese that the authorities banned it as subversive.  This being said the numbers of Christians was still small.  By 1918 they numbered around two percent of the population—around 300,000.  Interestingly, in a world dominated by colonisation, while Christianity was generally the religion of the conquerors, in Korea it was associated with the resistance.

After World War 1 the victorious forces, including Japan, met in Paris to shape the new world.  Korean’s stirred by the American president, Woodrow Wilson, with the vision of national self-determination and an end to imperialism.  Plans were quietly spread through the churches and on 1st March a declaration of independence was published, signed by thirty-three Korean leaders including sixteen Protestants.  This was accompanied by peaceful protests.  The protesters sang Christian hymns like, ‘Stand up, stand up for Jesus’, and ‘Onward Christian Soldiers.’

In response to these protests tens of thousands were arrested, hundreds were shot and religious gatherings were forbidden.  Japanese soldiers committed atrocities like the crucifixion of church leaders and shooting at protesting and singing hymns and songs of national independence.  Independence did not come from the Paris talks and many felt disillusioned.

There were some examples of resistance.  In 1935 a Pyongyang seminary a pastor preached a sermon entitled ‘Dare to Die’ against Shinto rites.  He died in a prison in 1944.  Sadly though, many were compliant and by the end of the Second World War there were examples of martyrs and also plenty examples of compromise.

Following the War, the country was divided in two along the 38th parallel.  The Soviet Union occupied the north and Americans the south.  The Republic of Korea was set up in 1948 in the south.  In the North Kim Il Sung came to rule in the Democratic People’s Republic of Korea. Kim Il Sung had actually been raised as a Christian and even taught in a Methodist Sunday school.

In 1950, North Korea launched a surprise attack and quickly took most of the peninsula.  Seoul was occupied for three months.  Christians were targeted—many churches were destroyed and pastors imprisoned.  The American-led United Nations force recaptured Seoul and briefly looked to take the whole peninsula.  Then the Chinese intervened.  There was a three were war, which ended with the original border. 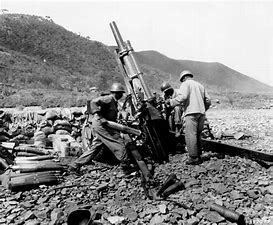 After the war the south was impoverished.  The nation’s first dictator, Rhee Syngman was actually a Methodist elder.  A student-led revolution toppled the government on 1960 and then in 1961 there was a military coup.    Park Chung-hee, the coup leader made himself President in 1963.  Park Chung-hee did it’s best to recruit the support of the church.  On one occasion he even attended a prayer breakfast hosted by sympathetic pastors.  To understand their support of this leader we need to remember that communism was thought to be a real threat, with North Korea just thirty miles from Seoul.  He was assasinated in 1979 but the military remained ion power.  First genuinely free election 1987, and the first civilian President was in 1992.

Evangelicalism grew massively in the years between 1960 and 1990.  Evangelicals made up less than 2.5 percent of South Korea in 1960 and 27 percent (just under 12 million people) in 1990.  This coincided with a time of unparalleled economic growth.

In 1907, during the Pyongyang revival, the newly founded Holiness Church (an offshoot of Methodism) coined the word sunbogeum (Full/Pure gospel).  The Full Gospel movement emphasised personal salvation, the Lord’s return and miracles.

In 1958 Cho Yonggi and Choe Ja-Sil founded a tent church in Seoul.  Cho was a convert from Buddhism who had come to faith after a healing from tuberculosis, although that healing was not complete and he struggled with his health.  Cho, who was twenty, was half the age of Choe, and married her daughter.  The thing that set their church apart was their emphasis on prayer.  Choe developed the idea of ‘triple prayer’—combining prayer in tongues, with prayer and fasting and all-night prayer vigils. 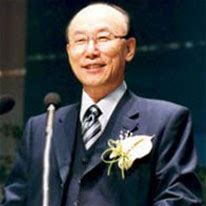 Cho emphasised ‘specific’ prayer.  The story is told that early in his ministry he prayed for a bicycle, and a desk and chair for his office.  But God called him to be more specific.  So, he prayed for a desk made out of Philippine mahogany, a chair with steel frame and little wheels on the bottom and a bicycle made in the USA.  He also prayed for worldly wealth for his congregation.  However, he did not want his hearers to be materialistic or covetous but prosper and have enough money to give to others.  He also emphasised the need to pray expecting that you will receive.  The church emphasises growth, reaching 100,000 in 1979, 200,000 in 1981 and 500,000 in 1985.

Cho has not been without controversy, being given a suspended sentence for tax evasion in 2014.  While some of his teaching may have lacked balance, he has generally not strayed far from orthodoxy, unlike come of the cults that developed in Korea.

There have a number of sects founded in Korea.

For example, Hwang Gukju, in the 1920s claimed that Jesus had been grafted into his neck.

The Inside Belly Movement was begun in the 1930s.  It’s founder, Heo Ho-bin, interpreted her own drawn out phantom pregnancy as a sign of Christ’s return.  She believed that the poverty that Jesus experienced in his first coming should not be repeated and so set about making beautiful clothes for his return.  Unfortunately, her church was based in what became North Korea.  The communists rounded up her followers, executed her and burned the large stockpile of clothing that had been made.

Another northerner Moon Sun-Myung escaped during the Korean war.  He set up the Unification Church (the Moonies).  He claimed to be the Messiah, set to complete the work that Jesus’ untimely death had left undone.  He has an emphasis of changing the world through ‘pure’ weddings blessed by Moon. 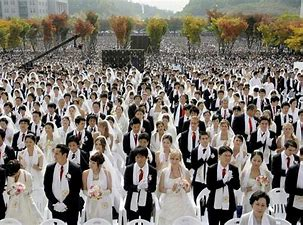 North Korea regularly tops the chart for persecution of Christians.  The regime claims that there is religious freedom but there is not.  There were a few pro-communist minsters who were permitted, including one who was vice-president from 1972-1982.  It is claimed that Christians can open churches, but Christians prefer to meet in house churches.  These churches are heavily monitored.  It is claimed that there were around 10,000 Christians in these house churches in the mid-1980s.

A person found with a Bible can have their extended family ‘sent to the mountains’ (that is prison camps).  It is normal for three generations of a family to be imprisoned together. 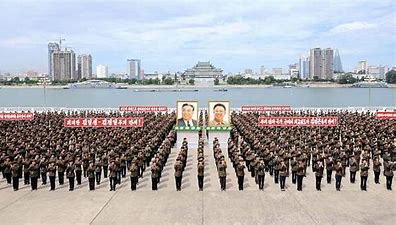 There has been something of a stagnation in the growth of evangelicalism in South Korea.  That may be to do with the numbing effects of prosperity and respectability (see Proverbs 30:7-9).  Alec Ryrie, from whom I got most of the information for this talk, related growth of the church to the growth on the economy during their ‘tiger’ years.  I think that he underestimates the role of prayer and an openness to the Holy Spirit.  I would seem that the churches that grow are those who remain faithful to the teaching of the Bible and are open to the power of the Holy Spirit.