The story of South Africa is one where a flawed theology facilitated terrible injustice, but it is also one that illustrates the beauty of a repentant people who were involved in the most miraculous transfer of power.

The Dutch East India company established Cape Town in 1652.  From there farmers began to spread inland which brought them into contact with the KhoiKhoi.  The KhoiKhoi were nomads whose language including making clicking noises with their tongues.  Missionary efforts to the KhoiKhoi were very limited.

One interesting story concerns a KhoiKhoi girl named Krotoa.  She was a servant in the household of the colony’s founding commander.  She swiftly learned Dutch and became a Christian.  She ate Dutch food, wore Dutch cloths and later described herself as having a Dutch heart.  When she travelled inland she was mocked for having a different faith.  However, she prayed for a relative to be healed of an illness and people listened to her message with tears in their eyes as her relative recovered.  Tragically when the commander moved to Indonesia, Eva lost her job and was said to have turned to drink.  Her life became a tragic mess.  Her story led some to believe that the KhoiKhoi were beyond reach.

By around 1700 European immigration had largely dried up.  The Dutch in Cape Town increasingly regarded those farmers on the frontiers (‘Boers’) with contempt.  These Boer settlers read their Bible through the lens of the Old Testament conquest, believing they were a chosen people been given a new Promised Land amongst a heathen people.

Not all Christians though viewed the surrounding cultures with hostility.  A Moravian missionary by the name of George Schmidt set up a mission station eighty miles from Cape Town in 1737.  Despite some success he ended his mission isolated and worn out and returned to Europe.  As a parting gift he left his Dutch New Testament with a girl whom he had baptised Magdalena.  In 1792 Moravian missionaries were able to return to the area and were greeted by a now elderly Magdalena who unwrapped the treasured Bible its sheepskin case.  The community had survived in their faith and they were not surprised that missionaries had return, for God had told them in a dream to expect their return. 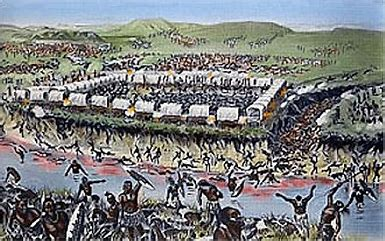 The colony was seized by the British between 1795 and 1806.  The first significant wave of British settlers arrived in the 1820s.  There was a distinction between the English settlers and the ‘Dutch’.  Those with Dutch roots would later be referred to as Afrikaners.

Hostilities between the British and the Dutch led to the Great Trek where about 12,000 Dutch-speaking inhabitants left the Cape Colony for the interior.  These people saw themselves as a covenant people escaping the slavery of British rule and heading to a Promised Land.  On the trek a group of 470 Dutch were attacked by a Zulu army of around 12,000.  They vowed to commemorate God’s mercy if they survived.  They fought off the Zulus without receiving any fatalities.  They did have the advantage of guns and a good defensive position, nevertheless interpreted their delivery as confirmation of their status as a covenant people. 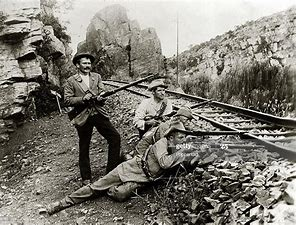 The Dutch established the colonies of the Orange Free State and the Transvaal Republic.  When diamonds and gold were discovered in these regions the British launched an attack on against the Afrikaners.  This became known as the Boer War (1899-1902).  The British forces emptied huge tracts of land of people and there was the new innovation of concentration camps.  The British victory was deeply resented and this resentment led to the formation of the National Party in 1914, with the aim of asserting Afrikaans identity.

The British tried to tie up the wounds left by the war with a promise of white unity.  This was a keystone of the newly formed Union of South Africa in 1910.  The former Afrikaner republics remained under white control and in the Cape Province, non-white rights were increasingly curtailed.

A theology emerged that believed that nations were defined by God and that these cultures should be preserved (Acts 17:26 was a cited text).  From 1929 on Dutch Reformed Church writers began to use the word ‘apartheid’.  The differing tribal groups were seen as representing different nations and the best way to maintain good neighbourly relations is to build good fences.

In 1948 the National Party campaigned on a policy of anti-communism, protecting the Afrikaans language and the emerging policy of apartheid.  It lost the popular vote but was able to form the government by formation with a small allied party.  Hendrick Verwoerd became minister of ‘native affairs’, a position he would hold until becoming Prime Minister in 1958.  The National Party would remain in power until 1994.  The National Party was seen as having close ties with the Dutch Reformed Church.

In 1956 a report of the Tomlinson Commission by the National Party suggested that South Africa itself be partitioned.  The white-ruled state should relinquish land to form a number of black-run states.  There were a number of problems with this.  This was not a mutually agreed policy and it was not in the interests of those who had the resources to give up the amounts of land that the Commission called for.  Prime Minister Malan suggested that the sort of apartheid that was envisaged was not yet possible.  Verwoerd who didn’t seem to share Malan’s personal Christian commitment was blunter in rejecting the Commissions intentions.

In 1959 Verwoerd became Prime Minister and proposed the creation of Bantustans, or ‘homelands’, for the black population.  These feel far short of the black-run states of the Tomlinson Commission.  Now those who worked in white areas were classified as immigrants.  There were condemnations of National Party policies from the English-speaking churches, but these tended to be tame.  However, the churches, including the Dutch Reformed Church, did stand up to the Native Law Amendment Act, which would have made it hard for non-whites to attend churches in white-designated areas.  This action forced Verwoerd to back down.

In 1960 the Pan-Africanist Congress called for nationwide demonstrations against the pass laws (which required non-whites to carry identification papers at all times).  At one march police baton charged and killed three protestors.  At Sharpeville, south of Johannesburg, police opened fire on a mostly female crowd, killing sixty-nine people.  A state of emergency was declared and thousands of opposition activists were arrested.  The Pan-Africanist Congress was banned, as was the more moderate African National Congress (ANC).

In 1968 a multiracial forum of churches, the South African Council of Churches, was refounded.  In 1976, the SACC’s white president resigned so that a black church leader could take the role.  The role was given to Desmond Tutu.  Drawing its inspiration from the civil rights movement in America, the SACC advocated peaceful civil disobedience.  The unrest of 1986-1990 left many dead and the fear that the country would descend into chaos.

The Road to Repentance

Yet South Africa witnessed a remarkable turn around and the role that the Christian faith of certain individuals played should not be underestimated. 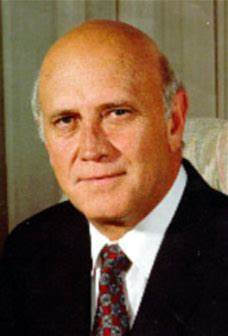 In 1989 a new president, F.W. de Klerk was elected.  He was a member of what was called the Dopper Church.  While we should not ignore the role that ANC pressure put on the government, it would be wrong to say that de Klerk was forced to the negotiating table.  In fact, military and intelligence advisors favoured believed that they could sustain a long war.  Also, it has to be realised what the white population risked in letting go of power—they could have lost all they had and be subject to terrible retribution.

There were external factors that facilitated change, including the fact that the Soviet Union was collapsing—meaning that there was less reason to fear communist influences in the ANC.  Then there was the moderating voice of Nelson Mandela.

A change in theology led to a willingness to reach out.  One survey of Afrikaner business leaders found that between 1968 and 1988 almost half ceased believing in the theology that humanity was divided into nations as an expression of God’s will.  It should not be thought that this change in belief was simply because South Africa was becoming more secular, church attendance was still high.  This was a genuine willingness to listen to their critics and re-examine their faith.

President de Klerk called for a council of all South Africa’s churches, which was held in November 1990.  The most notable event was when a Dutch Reformed Church leader, named Willie Jonker, issued a heart felt apology for his and the church’s wrongs.  Desmond Tutu responded to his apology by offering forgiveness.

Of course, things were not entirely smooth.  Some members of the Dutch Reformed Church, including former president P. W. Botha, resented been told that they were penitent.  Similarly, some criticised Tutu for been too quick to offer forgiveness.  Also, the Dutch Reformed Church’s formal statement to the Truth and Reconciliation Commission suggested that apartheid was an idea that had denigrated into injustice, rather than been an idea that was intrinsically wrong.

However, to see how great the change in the Dutch Reformed Church was one simply needs to see how the general synod invited the newly elected president of South Africa, Nelson Mandela, to address them. 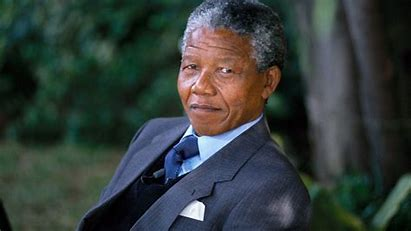 Those of us who are old enough to remember watching the news in the 1990s will remember the sense of hope and tension that accompanied the transfer in power to a black-led government.  Prayers were offered all over the world that this would happen peacefully.  Rarely in world history has there been such a change of heart amongst a ruling elite in handing over power to the majority.

Before we finish I want to make a few observations:

1.     Afrikaners were not the only people to believe that they were a nation with a special covenant to God.  Read the writings of Pearce on blood sacrifice and you will see that Ireland was rooted in a similar thought.

2.     The seeds of every known sin lie in each of our heart.  Racism is not only a white issue.  In fact, hatred of people who are seen to be ‘other’ is not only seen in issues related to skin colour.

3.     Apartheid may have been used to maintain inequality.  In that sense it is a microcosm of a global issue that we are involved in.  We live in the most affluent part of an unequal world.  Our purchases are made inexpensive because we depend on the cheap labour in other countries.  Our immigration policies are reflective of our desire to keep our wealth to ourselves and keep the ‘other’ separate from us.  Our government’s foreign aid budget stands at just stands just 0.32% (well below the 0.7% of GNP recommended by the UN.

4.  One of the tragedies of apartheid was the idea of segregated churches.  We should cherish the multiculturalism in our own church.  But sometimes our commitment to multiculturalism is shallow.  For example, people have said, ‘well if they are in our country they should do things our way.’  But we are not to be an Irish church, we are a church of God’s diverse people based in Ireland.  To insist that people in our church adapt to Irish customs is a form of segregation.  It says, ‘this is our church not yours.’